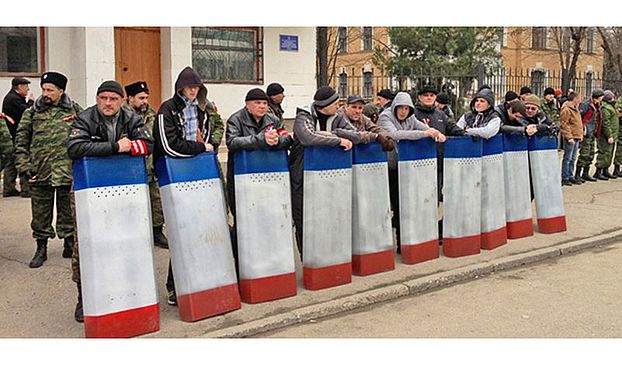 A Crimean self-defense group with shields painted as the flag of the autonomous republic, Simferopol, Ukraine, March 2, 2014. (Elizabeth Arrott/VOA via Wikimedia Commons)

The international news agency Associated Press has interviewed Prof. Michael Geary on the Ukraine crisis. As a result, his comments appeared in various media including Washington Post, The Guardian, Chicago Herald Tribune, San Francisco Chronicle, Seattle Times, and in the ABC News Network. In addition, Prof. Geary talked with the French daily, Libération, about the US position on the Transatlantic Trade and Investment Partnership negotiations.

In this interview, Prof. Geary speaks about the Ukraine crisis. Analyzing the issue from a global perspective, he argues that Putin “is far more likely to bow to pressure if it’s going to come from (German Chancellor) Angela Merkel than Barack Obama”. Most recently, an insurgent ambush killed six soldiers Tuesday in eastern Ukraine as Germany moved to jumpstart a possible plan towards peace that includes launching a dialogue on decentralizing the government in Kiev. The Ukraine crisis is an ongoing international conflict principally involving Russia and Ukraine over control of the Crimean Peninsula, which until February 2014 was administered by Ukraine. Currently, the Crimean Peninsula is controlled by the Russian Federation, a status which is not recognized by the United Nations. The crisis has also influenced riots on the Eastern and Southern regions of Ukraine.

Michael J. Geary is Visiting Fellow of the Institute for European Global Studies at the University of Basel. The Assistant Professor of Modern Europe and the European Union of Maastricht University, Netherlands, received his doctoral degree from the European University Institute, Florence, Italy. At the Institute for European Global Studies, he pursues a research project on "Integration or Disintegration?". It explores why the European Union needs a Post-enlargement Policy to deal with the multiple rounds of accession since the early 1970s. Amongst other fellowships, he was awarded the Global Europe Fellowship at the Wilson Center in Washington, DC, a Fulbright-Schuman Fellowship at the Catholic University of American (DC) and a European Parliament-Bronisław Geremek Research Fellowship at the College of Europe in Warsaw. He is the author of two books as well as numerous articles on EU integration, enlargement and EU-US relations.

The Associated Press is one of the largest news agencies in the world, headquartered in New York City. News collected by the AP are published and republished by more than 1,700 newspapers, in addition to more than 5,000 television and radio broadcasters.

In addition, Prof. Geary talked with the French daily, Libération, about the US position on the Transatlantic Trade and Investment Partnership negotiations.