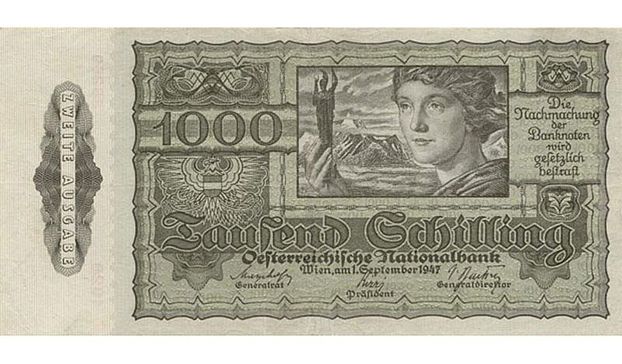 Nathan Marcus is a Postdoctoral Research Fellow at the Hebrew University of Jerusalem, Israel and one of several Visiting Fellows researching at the Institute for European Global Studies this year. In this interview, he introduces his research project on “The Births of Schilling and Deutschmark: a Social and Financial History of Austrian and German Currency Reforms, 1945 – 1955.”

Welcome to the Institute for European Global Studies, Nathan Marcus! What kind of research project will you pursue during your stay in Basel?
My research project in financial history focuses on an important turning point during the early cold war. In 1948 German currency reforms resulted in two separate currencies, one for the Western sectors and one for the Eastern sector. This was immediately followed by the Soviet blockade of Berlin and the division of Germany and Europe. I try to understand why the four occupying powers would not agree on a single currency for Germany. To do so I study the earlier Austrian reforms, where in 1947 all four occupying powers had still agreed upon one currency for the entire country.

Why did you choose this specific topic?
The currency reforms in Germany and Austria are particularly fascinating because they bring together so many important facets of cold war history. There are the postwar reconstruction and political struggles of Austria and Germany, the policies of the occupying powers, and finally the larger and evolving conflict of the cold war. Furthermore the reforms are directly linked to issues that concern us today. The new Western Deutschmark would go on to dominate European monetary affairs, thereby paving the way for a currency union and today’s Euro.

How does the topic relate to European Global Studies?
The cold war was carried out on a global scale. It reached almost every corner of the earth. My project tries to understand its origins. Understanding why two currencies were issued in Germany helps us identify the reasons behind the break-down of relations between the Soviets and the West. Were the Austrian reforms a precedent that could have been repeated in Germany had ideological conflict not stymied cooperation? Or did the experiences in Austria convince some of the Powers that cooperation was not practical any longer, even if it may have been more desirable generally.

What are you most excited about regarding your stay in Basel?
I grew up in Switzerland’s capital, Berne. So I am generally excited about being back after so many years. It is also great to have the archives of the Bank for International Settlements so close, since they hold much material that is important to my work. Finally, I have never been to a Basler Fastnacht, so I am certainly excited about my first Morgestraich!

Thank you for the interview, Mr. Marcus.