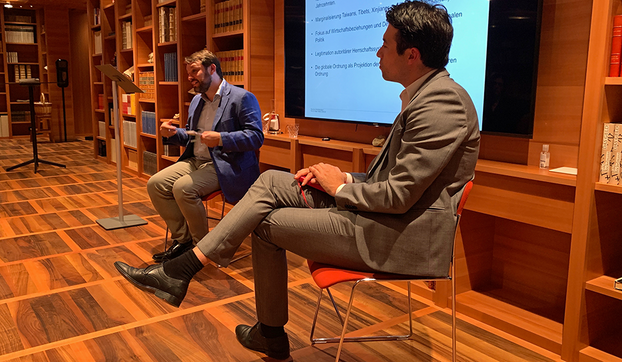 “The End of Multilateralism? - China and International Rulemaking in Geneva” was the topic of a public talk by Ralph Weber. The event took place at the Money Museum in Zurich on 30 September 2020 and was attended by about 40 interested guests.

With rising multipolarity and aggravating US-China strategic rivalry amplified by the ongoing Corona pandemic, the UN centered global system has come under increasing pressure in recent years. With China’s bid to “move closer to the world’s center stage” under Xi Jinping’s leadership, its influence has been arguably growing substantially within UN institutions. Multilateralism finds itself challenged, also in Geneva. There, China’s influence on international rulemaking has been registered in a variety of topics, ranging from human rights, to trade practices and technical standards. In his talk, Ralph Weber explored concrete policy fields to assess the state of affairs and identified implications for Europe and Switzerland.

The public talk on “The End of Multilateralism? - China and International Rulemaking in Geneva” took place at the Money Museum in Zurich on September 30, 2020. It was organized by the Money Museum in cooperation with the foreign policy Think Tank foraus and the Institute for European Global Studies.

The Money Museum is a museum devoted to helping people gain a deeper understanding of the development and the implicit rules of our monetary system and to increase the public’s knowledge about how economic and social movements are connected.