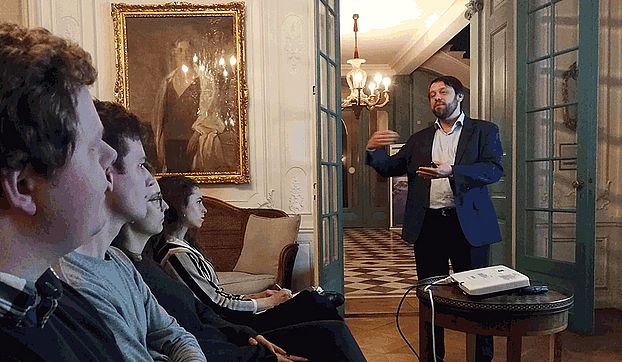 “The Chinese Party-State and Ideology” was the topic of an expert talk presented by Prof. Dr. Ralph Weber on March 26, 2019, in Basel. The talk was part of the China Policy Expert Talks, which are organized by foraus, a Swiss forum on foreign policy.

It is difficult to determine the role that ideology plays in today's China. Whereas the CCP seems to champion again Maoist (and post-Maoist) uses of ideology, propaganda, and political discourse, the relation to ideology has become ever more pragmatic and is devoted to the overarching goal of strengthening one-party rule. In his China Policy Expert Talk at the Institute for European Global Studies, Ralph Weber discussed if and how the pursuit of this goal may qualify as ideology, whether or not it makes sense to distinguish between internal and external propaganda, and he tried to flesh out the use of ideology for the Chinese Party-State.

“The Chinese Party-State and Ideology” took place on March 26, 2019, at the Institute for European Global Studies in Basel. It was organized by foraus, a Swiss forum on foreign policy, as part of their China Policy Expert Talks. In this series of events, foraus brings together experts for in-depth and informal discussions in an intimate setting on a diverse selection of China-related policy issues, ranging from cross-strait relations and the South China Sea dispute, to Chinese foreign policy with respect to the African continent.