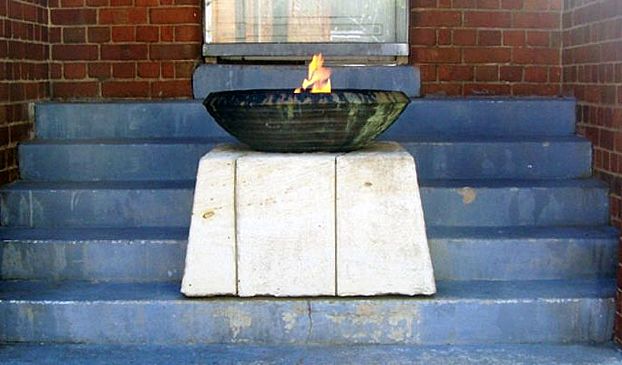 The flame of democracy in South Africa outside the constitutional court in Johannesburg (source: wikimedia commons)

Communism, Violence and Democracy in Algeria and South Africa is the title of a research project by Allison Drew. She was a Visiting Fellow at the Institute for European Global Studies from January to March 2014. In this interview, she introduces her research project.

Welcome to the Institute for European Global Studies, Professor Drew! What kind of research project will you pursue during your stay in Basel?
My research project is an extension of previous work on communism and national liberation movements, firstly in South Africa and subsequently in Algeria. My central concern is with the contrasting fortunes and achievements of the respective communist parties within the broader liberation struggles and following the end of minority rule by settlers of European descent.

The character of my current project represents a distinctive development from the detailed archival research that I have undertaken for the two cases. My concern is to develop a comparative and analytical treatment that will engage with influential models concerning the preconditions for democratization and hence to address the contrasting structures and practices of post-colonial regimes.

Why did you choose this specific topic?

The root of my project lies in the detailed work that I carried out on South Africa. I became struck by two central features. Firstly, the importance of the South African Communist Party within the liberation movement and its consequential status within the post-apartheid settlement and, secondly, the relatively non-violent transition from apartheid to democracy. My appreciation of this trajectory was deepened by my perceptions of the thoroughly contrasting Algerian case. The Algerian communist party was generally marginal, banned twice under French rule, and eventually suppressed shortly after independence. The struggle for independence and the post-colonial state were characterized by massive violence and authoritarianism. Yet these settler societies at each of the continent also demonstrated similarities. I initially planned to embark on a comparative study, but I quickly became aware of the paucity of existing literature on the Algerian case. Therefore, my next step was to produce a research monograph that would parallel my South African work. The completion of this provides the basis for an initial comparative exploration of the agenda that I had earlier envisioned.

How does the topic relate to European Global Studies?
The most obvious starting point is that Algeria and South Africa represent two of the most significant colonized societies where a minority of European origin exercised power over an indigenous majority, but were eventually displaced at significant moments in the twentieth century global decolonization process. However, the contrasting configurations of the British and French states made their contributions to the character of minority dominance in each case and subsequently affected the pattern of the liberation struggle. For example, the French defined Algeria as part of France, and the European minority and Algerian majority were under French rule. By contrast, from 1910 South Africa was a self-governing state within the British Empire and represented a concordat between the settlers of British and Dutch origin. Accordingly, European pasts shaped political struggles far beyond Europe in significant ways.

Moreover, communist movements within South Africa and Algeria were themselves the products of European crises and global ambitions. Once again, this supposedly uniform international communist movement was shaped in its impact in Africa by European agendas, successes and failures. The close relationship between France and Algeria meant that the agenda of Algerian communism was shaped and, in terms of national liberation, distorted by the politics of the popular front and anti-fascism. South Africa’s remoteness meant that its communist movement was much less damaged by the imperatives of European politics. If imperialist ambitions represented one European impact on Africa, communist hopes provided another.

In both cases communist and wider liberation movements were shaped by global religious movement. Many individuals within the South African liberation movement, including communists, were educated by Christian missionaries and, whatever their own religious beliefs, saw this education as a significant resource for their struggle for equality.

In contrast, the Algerian liberation movement was much more integrally linked with Islam, which was central to the cultural identity of the majority. This relationship offered relatively little space for a communist politics that despite the influence of Stalinism, nevertheless owed much to the traditions of the enlightenment.

What are you most excited about regarding your stay in Basel?
Both the Institute for European Global Studies and the city of Basel have provided outstanding space for the pursuit of my project. The stimulation provided by a multilingual, interdisciplinary and intellectually serious research institute has inspired me, and the space that I have enjoyed has given me vital time to think. The intellectual environment at the Institute for European Global Studies has been complemented by the stimulating people that I have met at the University of Basel’s Centre for African Studies. More broadly, Basel’s cultural richness has strengthened my sense of the richness and diversity of European identities; the question of identity is itself a vital element in my research. Basel has been an ideal location for my work.

Thank you for the interview, Professor Drew.