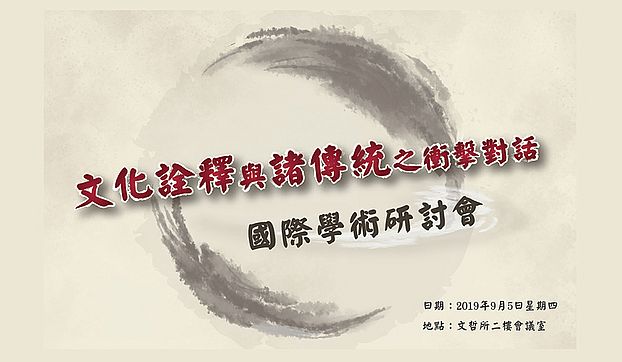 Philippe Major presented a paper at the conference “文化詮釋與諸傳統之衝擊對話” (Cultural Interpretation and the Shock and Dialogue between Traditions), which took place on September 5, 2019, in Taiwan. The academic gathering was organized by the Institute of Chinese Literature and Philosophy of Academia Sinica.

In his paper, entitled “The Culture that Transcends Cultures” (超越文化之文化：梁漱溟與唐君毅的文化哲), Philippe Major discussed the philosophy of culture of Liang Shuming and Tang Junyi. In his discussion, the postdoctoral fellow argued that in Eastern and Western Cultures and Their Philosophies (東西文化及其哲學, 1921) and Cultural Consciousness and Moral Rationality (文化意識與道德理性, 1958), Liang Shuming and Tang Junyi made use of a philosophical approach to culture in order to open up a discursive space for Confucianism within a post-May-Fourth discursive milieu characterized by anti-traditionalism and scientism.

Philippe Major is a postdoctoral fellow working on the SNSF project “The Exterior of Philosophy: On the Practice of New Confucianism”. He specializes in modern Chinese philosophy and intellectual history.

The Institute of Chinese Literature and Philosophy is a leading institution in the research on Chinese literature and philosophy in the Chinese-speaking world. Academia Sinica is a prestigious research institution located in Taipei whose previous presidents include intellectuals of high repute such as Cai Yuanpei and Hu Shi.