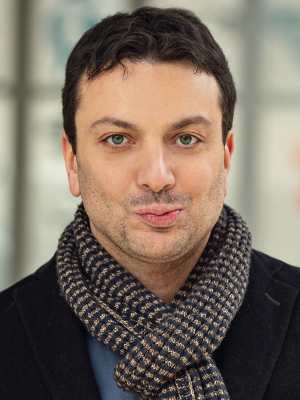 Vasileios Syros is Docent in Political History at the University of Helsinki, in Political Science at the University of Jyväskylä, and Director of the Early Modern Greek Culture Program at The Medici Archive Project (Florence, Italy). His teaching and research interests focus on the history of Christian/Latin, Islamic, and Jewish political thought and Comparative Political Theory. He has previously been a visiting fellow at the Institute for European Global Studies in the fall of 2018 co-operating with Prof. Ralph Weber in a project about “The Value of Comparison: Global History and Comparative Political Theory” (SNF Scientific Exchanges). He returns to the Institute for European Global Studies as an affiliated Senior Research Fellow for the period 2021–2026, supported by Finnish mobility funding for international cooperation, to pursue a project entitled “Comparative Political Theory and the Challenges of the 21st Century.”

Syros has published Medieval Islamic Political Thought and Modern Leadership (Papazissis, 2020) (in Greek), Marsilius of Padua at the Intersection of Ancient and Medieval Cultures and Traditions of Political Thought (University of Toronto Press, 2012); Die Rezeption der aristotelischen politischen Philosophie bei Marsilius von Padua (Brill, 2007); and Well Begun is Only Half Done: Tracing Aristotle’s Political Ideas in Medieval Arabic, Syriac, Byzantine, and Jewish Sources (ACMRS, 2011). His work has appeared in a number of international peer-reviewed journals, including Journal of World History, Philosophy East and West, Renaissance Quarterly, Journal of Early Modern History, Intellectual History Review, Medieval Encounters, History of Political Thought, Viator, and Revue des Études Juives. From 2014 to 2018 he directed the research program “Political Power in the Early Modern European and Islamic Worlds” and previously served as Principal Investigator for the project “Giovanni Botero and the Comparative Study of Early Modern Forms of Government” (2012–2017), which have both been funded by the Academy of Finland. Syros is the editor of the Edinburgh Studies in Comparative Political Theory and Intellectual History (Edinburgh University Press) and Medieval and Early Modern Europe and the World (Brepols). He also serves on the editorial boards of various academic journals, including Comparative Political Theory and Republics of Letters (Stanford University).