In 2019, the Institute for European Global Studies moved into the so-called "Sandgrube", the former summer house of the silk ribbon manufacturer Achilles Leisler. This location ideally represents the research field of European Global Studies: Starting from this house, a wide variety of economic and cultural connections have emanated to Europe and around the world since the 18th century. These connections reflect the local representation of the global as well as the global influences on the city’s local self-understanding. Among these connections are the original Chinese wallpapers used to furnish the Chinese Room on the second floor of the house, the exotic gardens staged for global cosmopolitanism, or the far-reaching financial and commercial relations of its residents. Today, the "Sandgrube" is an artifact for all traces left over in a local Basel environment by centuries of global exchange. 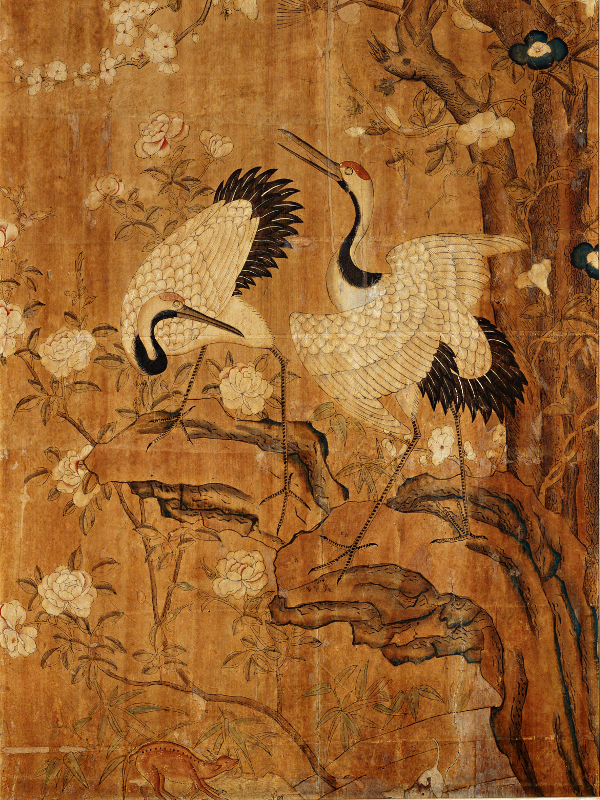 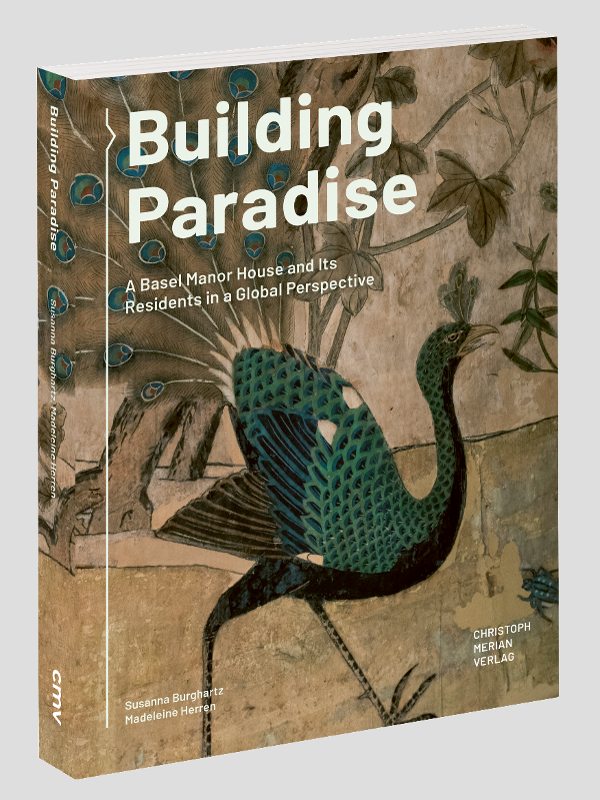 Publication
Building Paradise. A Basel Manor House and its Residents in a Global Perspective

The Sandgrube – The History of the Building

The cosmopolitan Leisler family and the construction of the Sandgrube

The Sandgrube was built by the Basel architect Johann Jakob Fechter for the silk ribbon manufacturer Achilles Leisler. Achilles, born in 1723, used this house as a status symbol for his family. The Leisler family was wealthy and enjoyed a good reputation, being well-connected not only in the local political scene in Basel: Since the 17th century, they maintained relationships with the political and economic hubs in Europe and beyond.

In the mid-17th century, the brothers Franz Leisler – Achilles' grandfather – and Jacob Leisler departed from their hometown of Bockenheim near Frankfurt (Main) in two different directions. Franz moved to Basel in 1658, where he took up an apprenticeship at a silk trading firm and later successfully founded his own firm in which he was joined by his brother Hans Adam. Jacob emigrated to the colony "Nieuw Amsterdam" (today: New York) as a soldier in the service of the Dutch West India Company in 1664. There, he started a successful career as a merchant and became one of the most influential wholesale trader of the colonial New York. He reached the peak of his career when he was named Lieutenant Governor during the Glorious Revolution of 1689. However, he was sentenced to death for high treason against the British monarchy and executed soon after. Meanwhile, Franz became a partner at the firm Mitz, Sarasin & Leisler in Basel. Through the international trade with silk stockings and ribbons, he amassed great wealth. Particularly among the financiers in Europe, he acquired great notoriety. When Achilles took over the family business from his father and grandfather, the Leislers were among the most powerful families in Basel. Their status was due not least to their decades-long cosmopolitan perspective in trade and production.

The Riehenstrasse in the 18th century: Picturesque summer houses and (proto-)industrial trade area for the global market

The Sandgrube was built in the mid-18th century in an extremely dynamic environment. In the picturesque Riehenstrasse, between the city wall and Riehen, the wealthy citizens of Basel set up luxurious summer residences and pavilions. Among these were – apart from the Sandgrube – also the De Bary country house, the Faesch-Leisler country house and the Ryhiner-Leisler country house by the Riehen pond. While at first intended as venues for festivities and secondary residences, the villas were used year-round by the end of the 18th century.

At the same time, the area north of the Gate of Riehen was a vibrant trade area: Textile printing factories and mills for dyeing wood were established amongst the residences and gave the rather rural surroundings an industrial flair. The proximity to the Riehen pond was particularly advantageous for the cotton processing industries: Almost opposite of the Sandgrube, Samuel Ryhiner and his brother Emanuel Ryhiner-Leisler – Achilles' brother-in-law – placed their Indienne manufacture. Through the trade with so-called Indiennes – European imitations of colorful cotton cloth with exotic motives originating from India – the Riehenstrasse was closely tied to the early proto-industrial processes of the global market. The Ryhiners sold their textiles to Guinea in West Africa, but also to the North American colonies via the port towns Bayonne, Nantes or Le Havre.

Representations of the Global: The Chinese Room

The Leislers' aspiration to cosmopolitanism is represented by the architecture and the design of the gardens, but also by the interior of the Sandgrube. In the 1750s, Achilles ordered the Chinese Room – with Chinese wallpapers attached to the walls – to be built on the second floor of the house. This was fashionable among the European upper classes who had a growing fascination for Asian products. While European artists and architects produced so-called chinoiseries – imitations of Chinese goods such as furniture, wallpapers or decorations – the very rich ordered their wallpapers directly in China. As did Achilles: Contrary to those at the Wildensteinerhof, the Bruckgut or the Wildt family house, his wallpapers were original Chinese exports – the only ones in Switzerland that are fully intact to this day.

The Chinese wallpapers that were exported to Europe originated from the Chinese city of Canton, the only commercial port that was accessible to Europeans in the 18th century. Specialized painters produced the wallpapers specifically for the European market. They showed exotic motives such as Chinese gardens, plants, birds and fruit. The wallpapers were imported to Europe exclusively by members of the European East India Companies that had been granted the permission to trade privately. The wallpapers – which have by now yellowed strongly – are a tangible example for the Basel upper classes' affinity to consumption goods from outside of Europe.

The Frères Merian and representative architecture in the 19th century

Between 1804 and 1931, the Sandgrube was owned by the Merian family. Basel-based entrepreneur Johann Jacob Merian, co-owner of the company Frères Merian together with his brother Christoph, had bought the house. During the turbulent years between the French Revolution of 1789 and the end of the Coalition Wars in 1815, their firm was one of the most powerful financial institutions worldwide. Through speculative trades in raw and processed cotton, rubber, timber, spices and sugar, the Frères Merian maintained far-reaching economic and financial relationships. The company made use of informal networks which provided them with useful information on goods, markets and political changes. This allowed the brothers to not only circumvent the British Continental Blockade during the Coalition Wars, but also stimulate the transatlantic maritime trade relations.

Under the aegis of the Merian family, too, the fortunes acquired through colonial trades materialized in the ostentatious Sandgrube: Johann Jacob and his descendants expanded the estate several times in the 19th century and reshaped the appearance of the summer house. To the baroque garden, already created by Achilles in the 18th century, greens in English style were added. It became a projection screen for cosmopolitan ambitions which were reflected in the exotic choice of plants. Under the ownership of Johann Jacob Merian's daughter-in-law, Elisabeth Merian vonder Mühll, several buildings and annexes were added to the Sandgrube after 1874 and thus, it reached the height of its expansion.

The Sandgrube on its way into the 21st century

During the 18th and 19th centuries, the Sandgrube was representative of the glamorous and successful activities of traders from Basel. After the railway station Basel Badischer Bahnhof was moved from the premises of the Mustermesse to its current location in 1913, the area changed fundamentally. Changes in urban planning and the emergence of new modes of transportation such as trams and railways blurred the distinction between the urban city center and the rural character of the Sandgrube. The Riehenstrasse became a central transport hub and as the neighborhood was dominated by working-class and single-family houses, the Sandgrube was no longer central part of it.

When Rudolf Merian, a medical doctor and the last member of the Merian family to live in the house, died in 1921, the family decided to rent out the country home. Among the first tenants was the art dealer Hans Wendland. Wendland, who would later become embroiled in looting committed by the Nazi regime, mainly used the Sandgrube for collecting local and international works of art. From the nationalization of the estate in 1931 to the 1950s, the Sandgrube changed occupants several times: Among others, it was used by Francis Rodd, the British representative at the newly founded Bank for International Settlements. The last tenants, the Basel family Simonius-Vischer, lived there from 1937 to the beginning of a phase of renovation in the 1950s.

In 1959, the Sandgrube, with its symmetrical, baroque look, was reopened as a teacher training college in its symmetrical, baroque look. In 1951 and 1958, two school buildings and a vocational school were set up, further adding to the focus on education present in the house's surroundings. When the Institute for European Global Studies moved into the building in the autumn of 2019, this focus was upheld. However, by housing a university institute studying Europe's relations with the world from a global perspective, the Sandgrube also returns to being a symbol of Basel's global interconnectedness.