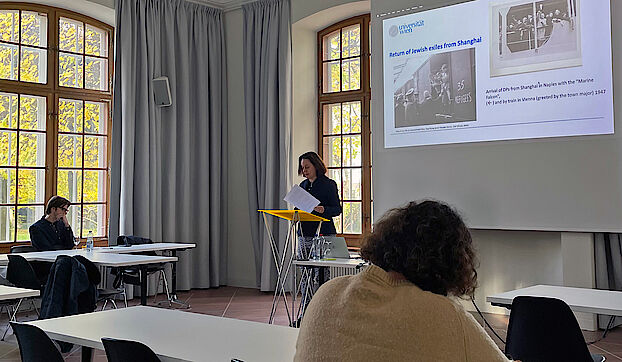 In her talk, Kerstin von Lingen recounted the history of the expropriation of Austrian Jews by analyzing the connection between citizenship and property.

In her presentation, Kerstin von Lingen recounted the history of the expropriation of Austrian Jews by analyzing the connection between citizenship and property, thus highlighting the pivotal role that conceptions of citizenship played in “one of the greatest organized thefts in history, the ‘aryanization’”. Among other things, pre-Hitler legislation linked certain property rights to the status of a citizen, which made it possible for the Nazis to “legally” seize the property of Jewish residents, who forfeited their ownership rights once they crossed the German border.

Retracing the escape route from Vienna to the port of Trieste and to Shanghai, von Lingen reconstructed material flows of the property that accompanied the emigrés to the port of Trieste but was then sequestered there. In this way, entire households, important paintings and personal objects were stolen to be sold or stored in the warehouses of Italy and the Third Reich. Her presentation thus raised key questions about citizenship rights, identity and belonging. The presentation was followed by a lively Q&A session.

Prof. Dr. Kerstin von Lingen is Professor for Contemporary History at the University of Vienna. From October to December 2022, she joins the Institute for European Global Studies as a visiting professor. Her research interests include the history of genocide and violence, particularly the Holocaust, as well as processes of decolonisation with a focus on Asia.