Taking International Humanitarian Law "out of the book"

At the beginning of the spring term 2020, we had the opportunity to participate in the Jean-Pictet Competition 2020 as part of Team University Basel. The Jean-Pictet Competition is one of the longest established Competition of International Humanitarian Law (IHL). It is named after a Swiss legal practitioner Jean Simon Pictet who was a member and vice president of the International Committee of the Red Cross (ICRC) and most famously known for his commentary on the 1949 Geneva Conventions. The Competition has been held once per year since 1989 in changing locations. This year’s destination was Denpasar (Bali) in Indonesia.

Each year, 48 Teams consisting of three people from all over the world are selected and meet for one week. There is the possibility to either participate in English or in French: we competed in French. The aim of the Competition is to “take the law out of the books”. This means that during the week no written tasks are required but instead, the teams compete in the context of simulations and role play around a fictitious armed conflict. In the course of the competition the conflict scenario evolves and the teams take up the role of various actors in armed conflicts, such as legal advisers of the military, ICRC delegates, UNHCR employees, etc. The performance is judged by an international jury of experts.

But let us start from the beginning. In September 2019 Amandine Mekolo (Master EUCOR), Yanik Weingand (European Global Studies) and Fiona Mubi (European Global Studies) applied as candidates for the University of Basel Team. After being selected, we dived into the preparations for the Competition under the tutelage of Prof. Dr. A. Petrig and our tutor, Onur Dur. Fortunately, they had both previously participated in the Competition and were able to provide us with useful material, as well as tips on role-playing. During the course of the semester, we had weekly reading assignments (usually 100+ pages) that prepared us all along with exercises similar to the tasks we were going to encounter at the Competition. 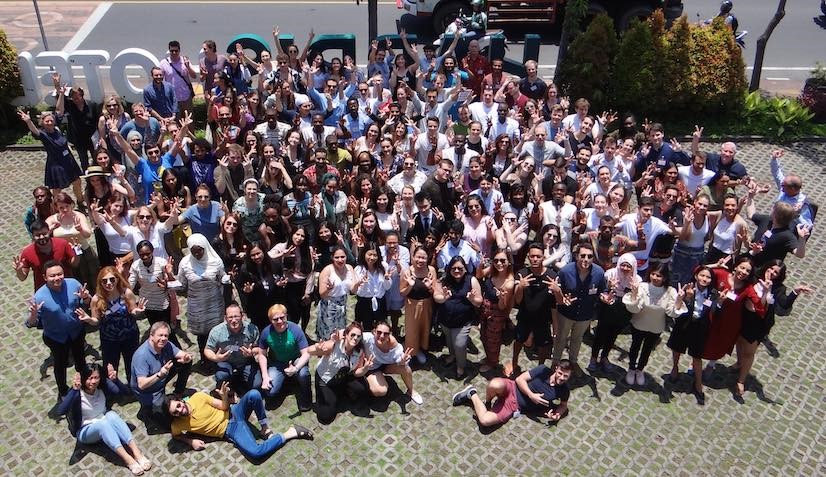 With our departure date, February 21, quickly approaching, we spent the time after the exams immersing ourselves in continuous preparation. Finally, on February 22, we arrived in Denpasar. In the evening we were welcomed with a big buffet where we got to meet the other teams and the jurors. The next day was spent listening to presentations on what we were to expect during the coming week, an account of an ICRC delegate about his experience in war zones, and measuring ourselves against the other teams in a first mock-exercise.

Monday morning came, and the game was now on for real. The next four days were much of the same routine. We had two exercises per day, one in the morning and one in the afternoon. Each time we received a dossier with the latest developments of the case, the role we were to play, how much time we had for preparation (ca. 40-120 min), against whom we were to compete and whether the jury was active or passive (“plante verte”). After the allotted preparation time the simulation (ca. 10-40 min) began where we tried our best to bring forth and defend the interests of the organization attributed to us.

One of the highlights was the field-exercise. Along with all other teams, we were called into the big conference hall for an international conference organized by the ICRC and national Red Cross Societies on COVID-19. Once seated, masked men with (prop) guns stormed the room and took us all hostage. We were blindfolded, divided into smaller groups and led away into separate rooms. Over the next two hours we were put into various small simulations where we were supposed to apply the theoretical knowledge to the practical situation. Examples included convincing a military commander to let us take care of civilian victims of a mine explosion and not give preferential treatment to his wounded soldiers or being in a simulated dark cell and having to give an ICRC delegate the pertinent information concerning our imprisonment.

On Thursday afternoon the official part of the week ended for us. We sadly didn’t make the cut for the semi-finals. This meant that we were able to spend time with the other teams and the judges and get to know them better. On Friday we were allowed to attend the semi-finals and finals as spectators and witness the winning performance, it was the team from Australia who took home this year’s trophy. In addition to the announcement of the winner, the “Gilbert-Apollis Prize” for best speaker was revealed and Yanik Weingand was one of the three people nominated in the French session.

The evening was spent eating, drinking, and dancing with jury and participants alike. The next morning meant goodbye for most. We were lucky enough to spend a couple of additional days on the island and explore it, which we did with some of our new-found friends.

The three goals of this year’s Competition were “learn, meet, and enjoy”. We can say with certainty that we accomplished each one of them. For those of you interested in becoming part of the‘Pictet-Family’, we can only fully recommend the experience and offer you our support if you wish to know more.

Last but not least we want to thank Professor Petrig for her support and Onur Dur for helping us prepare for the Competition during months. We also thank the organizers of the Jean-Pictet Competition, especially Christoph Lanord. Another big thank you goes out to the Portland Cement-Fonds who generously covered all our expenses for the participation in the Competition.