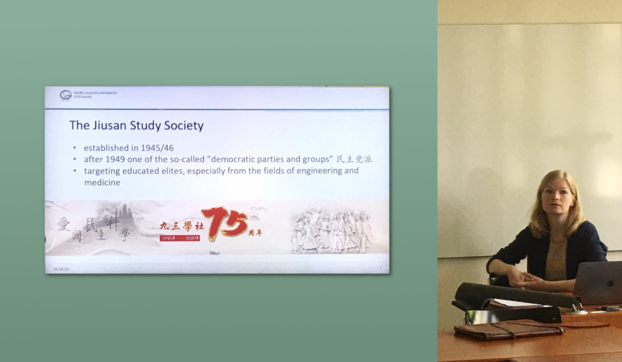 "Digital Humanities and Network Analysis in Chinese Studies" were in the focus of a workshop at the Institute for European Global Studies on April 29, 2022. The workshop was organized by the project "The Exterior of Philosophy".

As the first part of the workshop, Prof. Henrike Rudolph from the Department of East Asian Studies at the University of Göttingen presented her current research in her talk "Methodological Challenges in Analyzing Historical Social Networks: The Jiusan Study Society as an Exemplary Case Study".

In the second part of the workshop, the research group around the project "The Exterior of Philosophy: On the Practice of New Confucianism" presented and discussed their most recent digital humanities project "Mapping New Confucian Networks (1911–2021)", which attempts to trace social and scholarly networks among modern Confucian scholars throughout the 20th century.

The project "The Exterior of Philosophy: On the Practice of New Confucianism" looks at the practice of twentieth and twenty-first century modern Confucian philosophy and its entanglements with a series of local and global challenges. It aims, on the one hand, at exploring the possibilities of a Sociology of Philosophy approached as a philosophical sub-discipline. One the other hand, it explores modern Confucian philosophy's embeddedness in, and relations with, the socio-political.