The Divisive Power of Citizenship 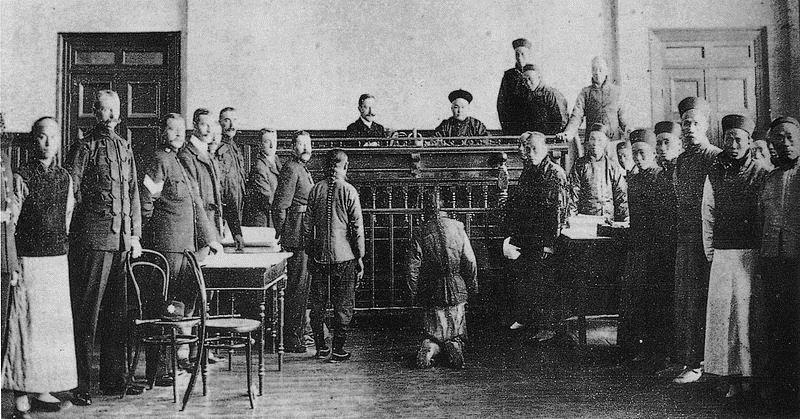 Mixed and Colonial Court: The creation of the international settlements after the First Opium War was accompanied by a shift in jurisdiction and power, from the Qing dynasty towards the respective European Powers. One consequence of these new legal responsibilities was the introduction of Extra-territoriality on Chinese soil. This picture captures a so-called ‘Mixed and Colonial Court’, which concerned itself with legal disputes between parties of different nationalities. (Wikimedia Commons | Public Domain) 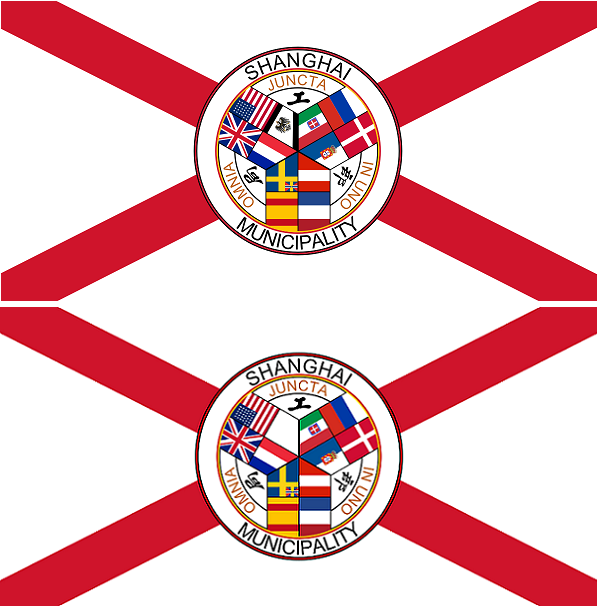 Flag of the Shanghai International Settlement: The two seals of the Municipal Council, represented here within the flag of the Shanghai International Settlement, are from before and after 1919. The difference lies in the flag of the German Empire: it can be found in the top left-hand shield of the pre-1919 version, however, in the post-World War One version the space previously occupied by the German flag is blank. (Image by Lokal_Profil | CC BY-SA 2.5) 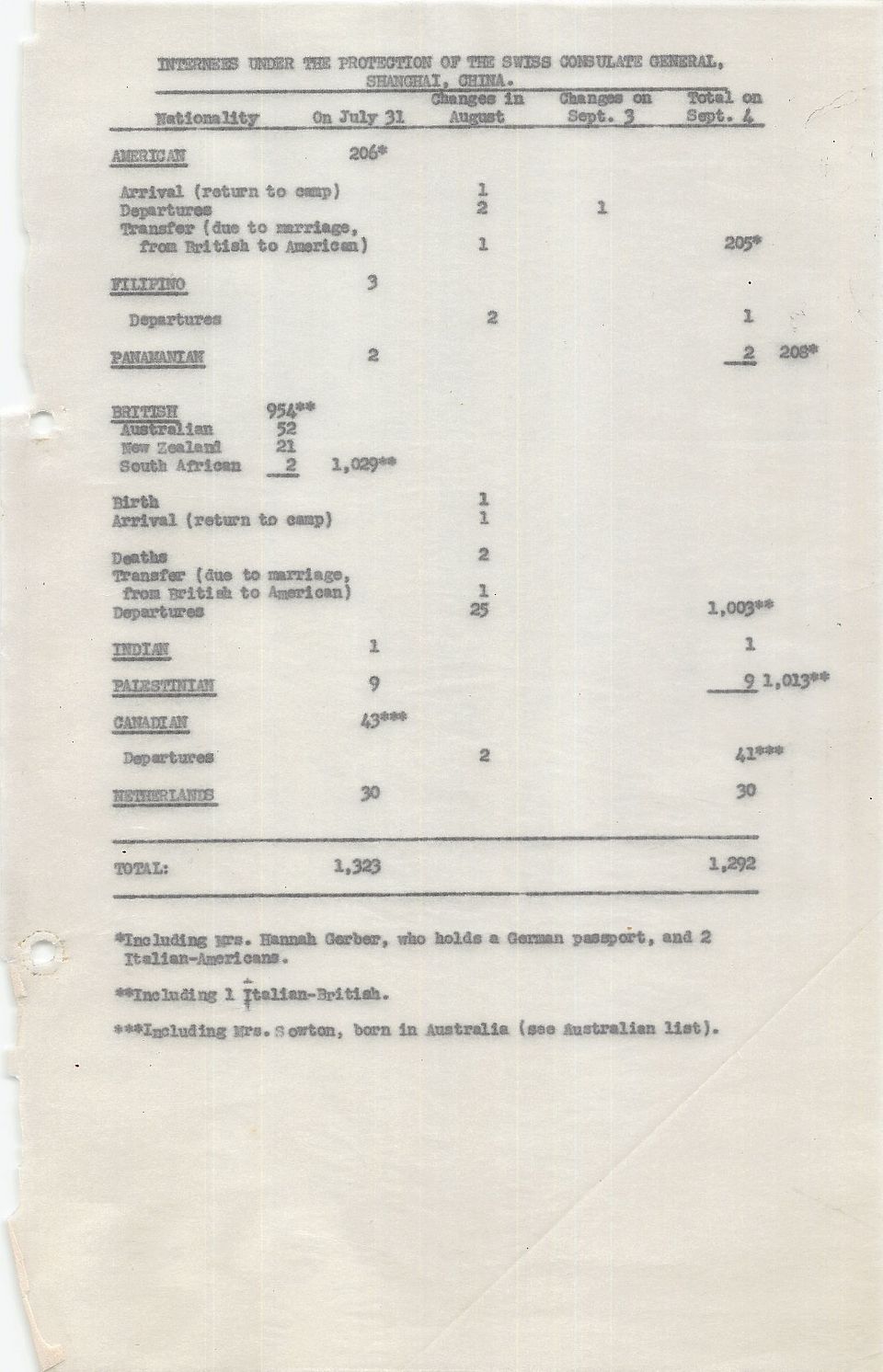 Civilian Internees of the Weihsien Internment Camp: This list represents the multitude of different nationalities interned by the Imperial Japanese Army upon the conquest of the international settlements, notably in Shanghai, at the outbreak of the Pacific War in early December 1941. The list was compiled by the Consulate General of Switzerland and access has been granted via the Swiss archives. (Image: Schweizerisches Bundesarchiv | CH-BAR#E2200.295#1000-451#35#1)

Erosion of nationality and the politicization of citizenship have become dominant features of discourse in Western democracies. However, these issues are not new: since the beginning of the 21st century Western states have been loosening historic hurdles to de-naturalization of their citizens, mainly as a consequence of the War on Terror and stricter treatment of migrants. In addition to this re-framing of citizenship – as a privilege that can be lost – supra-national organizations pose orthogonal challenges. For example, the European Union grants its citizens free movement, thereby relaxing the historic connection between citizenship and geographical region and replacing nationality with a new form of multi-layered citizenship.

This project, "The Divisive Power of Citizenship", seeks to relate and connect these recent processes effectively with historical precedents to create an expanded understanding of citizenship which can both reveal new insights about the past as well as the contemporary situation.

Focusing on East Asia in the early 20th century, we examine conditions applying to European merchants, whose citizenship bestowed distinct jurisdiction and rights compared with their Asian contemporaries – creating multilayered trans-cultural communities. Such competing communities can be analyzed in terms of colonial privilege, racism and nationalism, affording new perspectives on historical communities and also provide a lens through which to view the tumultuous processes at work today. Chronologically this survey spans the period between 1919 and 1945, witnessing the climax and decline of western dominance in East Asia and also the rupture precipitated by the Pacific War.

The project studies evolving international relations and colonial expansion from this perspective, acknowledging the complex changes in the operation of citizenship. By focusing on the consequences of interaction between multiple communities we can describe the 20th century in a new way. We have formed an international collaboration to achieve this: the project brings together Prof. Dr. Toshiki Mogami, an expert in international law and organization, and Prof. Peter Cornwell, an expert in data science with Professor Dr. Madeleine Herren's team at the Europa Institute, Basel and Professor Dr. Sacha Zala of the Diplomatic Documents of Switzerland.

We will create Findable, Accessible, Interoperable and Re-usable (FAIR) data resources under the canopy Pacific War Documentary Chain (PWDC), tracing the lives of thousands of citizens living abroad during this period, and also aggregating for the first time in one place information about those interned during the Pacific War.

The project will develop a theoretical conceptualization of citizenship and offer new perspectives in historical research, bringing previously unavailable documents into focus and delivering empirical findings to shape future visions of citizenship. Collaboration with CERN's data repository group and with the Research Data Association will enable state-of-the-art standards-based data resources to be created to benefit the wider scholarly community, protecting research investment in the long-term and providing a robust foundation of primary material for future researchers.

The Divisive Power of Citizenship comprises multiple sub-projects which are closely intertwined and share a common digital research infrastructure – providing workflows to connect leading scholars in citizenship studies and international human rights law internationally, especially in Japan. This infrastructure promotes dialogue between theory- building, historical empiricism and data science; precipitating face-to-face debate and confronting PhD students with the latest digital methods and their impact on humanitarian law and history. The sub-projects will together build a shared digital resource – the Pacific War Documentary Chain – correcting the existing scarcity of knowledge about citizens living abroad during the early 20th century.

This subproject will examine the way in which the reconfiguration of citizenship undertaken by the Vichy government affected French citizens living abroad. This is a new and vital inquiry, since Vichy legislation threatened the members of the Free France movement with denaturalization. Divisive Loyalty and Citizenship thus explores to what extent the composition of well-established communities in the French concessions in China changed as a result. The project investigates the consequences of national legislation on citizenship in terms of its impact on the lives of citizens living abroad and both employs the PWDC and contributes further to it. In addition, the project reflects on the extent to which the legislation drove trans-national coordination and exchange. Chinese-French deliberations about the return of French concessions to China will be examined to determine how this apparent act of decolonization, which was presented as an anti-imperial intervention by the Japanese government, impacted civilians. Discussions between Nazi Germany and Vichy France will be considered, to better understand proposals for a new citizenship law, which although never enacted were instrumental in shaping discourse from a fascist perspective.

Only rarely does research literature ask the crucial question proposed by Murphy about the internment of Europeans in the colonies during World War I: "To what narrative does the story of Europeans in captivity in the colonies belong? To European history, to a colonial approach, to international politics and diplomacy or an extra-European point of view?" This sub-project seeks to understand enemy alien regulations not just as a way of destroying foreign communities, but also as a disentanglement of a specific hybrid social space resulting from the activities of those not living in their country of origin. Enemy Aliens will investigate to what extent occupying armies used this potential to build racially defined communities. For example, British Indians were exempted from enemy alien regulations as a ‘suppressed nation’, and enemy nationality was ignored in the case of Catholic missionaries. In this respect, the sub-project fills a substantial gap by employing a transcultural focus and multilayered forms of citizenship to these issues for the first time.

This sub-project challenges the well-known sociological approach to citizenship by examining both its divisive and integrating forces in a global context. Reformulating conventional historical narratives of the 20th century in this way reveals new perspectives. On one hand we consider the omnipresence of refugees from the 20th century onwards as new condition, while on the other hand we trace the establishment of trading communities which first created the global circulation of goods; often opposing national agendas advanced in the past by colonial administrations. This un-packages hopes, tensions, disappointments and distortions which the global order of the 20th century inflicted on individuals – enabling us to model ‘practices at the local level’ and employ new techniques of data science. Instead of presuming an unfortunate, though transient, failure of the international system punctuated by world wars, we will consider the establishment of international trading networks and communities and mounting flows of refugees as intrinsically and inseparably linked to the global spread of national citizenship in its specifically modern form, based on the belief that ethnically homogeneous states present a better guarantee for peace than societal diversity. This enables us to test the utility of a global history from below – offering a way of monitoring the ‘condition humaine’ of 20th-century history.

Citizenship/Nationality is the minimal unit of state sovereignty. Although the concept of sovereignty has always been ambiguous, as was evidenced at the time of the 1884/5 Berlin Conference for the “civilizing” division of Africa, it can nonetheless be broken down into pieces until the minimal legal component of the sovereign state is reached, that is, the individual.

Despite the ambiguity of the concept of sovereignty on the international normative plane, its clout on the domestic plane is nothing but real; concrete and irresistible in matters of states’ rule on citizens, at least when it expresses a lawful rule in the Weberian sense. And this irresistible power of the state is most visibly embodied in the citizenship/nationality subject, concerning which the state is endowed with almost unlimited discretion: it is a sovereign matter which defies all interventions from other states or even international law. Thus, it can be arbitrary.

Because of this legally exclusive and therefore arbitrary nature, citizenship/nationality has been manipulated by the state, either in the form of unilateral deprivation or forcible endowment, both of which are executed regardless of the will of the individuals (citizens and non-citizens) concerned. It also reflects the dual nature of citizenship/nationality. On the one hand, its non-possession may inflict damages on the individuals concerned; on the other, its possession may rob the individuals of the freedom to select a political, social and economic regime of their own preference.

History is full of examples of such manipulation, largely legitimized and authorized by international law. The purpose of this sub-project is to critically re-examine those cases, and bring to the fore the humanity-oppressive function of legal institution, particularly that of international law. We will thereby consider if this institution of citizenship/nationality can be an indispensable component for the construction of a preferred world order.

Information about foreign residents in East Asia during the early 20th century is distributed among multiple sources, predominantly as raw data—voluminous lists of employees, society memberships and later, internees and exchanges of nationals. Such analysis as was undertaken by colonial and corporate administrations in these countries was effectively scattered by the upheaval of two world wars, so that historians have faced the task of piecing together the lives of individuals and communities through fleeting appearances in interminable basic records. Moreover, such documents have heretofore proved highly resistant to methodological analysis using existing digital techniques due to their irregular layout, inconsistent pagination, lack of indices and often poor print and paper quality. Information from single events or years has enriched research footnotes, but methodological tracing of foreign residents’ and displaced persons’ lives in East Asia during these crucial years has not been attempted. A vacuum of comprehensive information has shackled progress in the field.

The Pacific War Documentary Chain addresses the root of this problem; integrating the heterogeneous sources that survive and applying the latest extraction techniques to build millions of ‘instance records’ of entities appearing in multiple corpora year upon year. Rather than relying solely on computer linguistic techniques, which are susceptible to inaccurate character recognition, reliable instances of persons, companies and institutions (accompanied by schemata describing each source) are being developed using dynamically generated dictionaries and neural nets trained through manual annotation. This enables automation of the correction of recognition errors, which is essential because of the huge numbers of person and corporate instances. Each instance remains linked to the fragment of the printed source where it was discovered for analysis preservation, creating new interoperable corpora in which instances in source documents can be ascribed to persons and companies. These representations have been made technology-agnostic, so that a wide range of instruments can be applied to PWDC – making individuals’ histories traceable for the first time and creating a definitive digital resource for future generations of scholars.