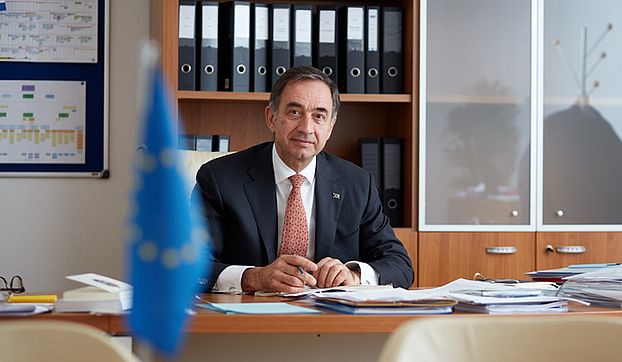 “The European Union as a Global Actor” was the topic of an Europakolloquium with Michael Matthiessen, Ambassador of the European Union to Switzerland and Liechtenstein. The colloquium took place on Wednesday, September 26, 2018, at 6:15pm at the Institute for European Global Studies.

In his lecture, Ambassador Michael Matthiessen talked about how, in a time of geopolitical shifts and return of power politics, the European Union has become one of the main defenders of free trade and effective multilateralism. In addition to its original aim to secure peace on the European continent, the EU is increasingly getting the task to shape globalization in accordance with European values. The EU will succeed in this endeavor only if it acts united and in close cooperation with like-minded partners.

Michael Matthiessen is the Ambassador of the European Union to Switzerland and to the Principality of Liechtenstein. Before taking up his duties in Bern, he was Principal Advisor in the Asia and Pacific Department of the European External Action Service (EEAS) in Brussels, responsible for the Asia-Europe Meeting (ASEM). Michael Matthiessen looks back on a diplomatic career of over 30 years, the last 19 years in senior positions in the European institutions.

The Europakolloquium took place on Wednesday, September 26, 2018, at 6.15pm in the seminar room (downstairs) of the Institute for European Global Studies (Gellerstrasse 27).