How to Interpret Political Texts? New Book by Martin Beckstein and Ralph Weber 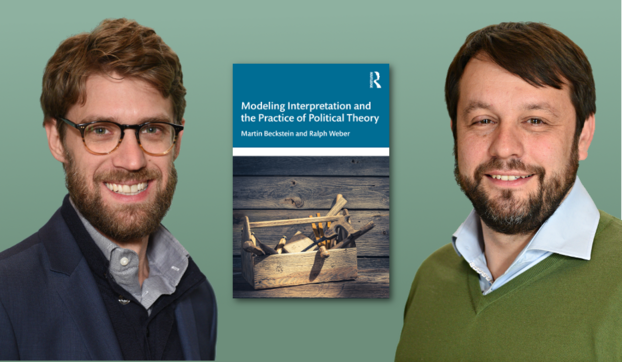 Picture: Martin Beckstein and Ralph Weber | Cover of their book

In an insightful new book, Martin Beckstein and Ralph Weber guide the reader through eight different approaches to analyzing texts in political theory. For each approach, they detail advantages and limits as well as possibilities to combine it with others. "Modeling Interpretation and the Practice of Political Theory" is a hands-on textbook suitable for both students and experienced scholars of political theory. It was published in August 2021 by Routledge.

Political theory offers a great variety of interpretive traditions and models. Today, pluralism is the paradigm. But are all approaches equally useful? What are their limits and possibilities? Can we practice them in isolation, or can we combine them? "Modeling Interpretation and the Practice of Political Theory" addresses these questions, not only describing eight interpretive schemes in the abstract, but also testing them in practice. Finally, the authors propose pragmatist eclecticism as the way forward in interpretation.

"How are we to interpret texts of political theory? What approaches work? Can we get different or contrary perspectives to work together? This book gets to grips with these questions, and what is more does so in a highly readable way." Gary Browning, Associate Dean, School of Social Sciences, Oxford Brookes University

"This excellent book is impressively wide-ranging, covering eight approaches to interpreting a variety of texts – and importantly, arguing that we should combine approaches rather than using only one approach. The writing is clear and accessible, and the authors use examples very instructively." Adrian Blau, Associate Professor of Politics, Department of Political Economy, King's College London

Martin Beckstein is Senior Teaching and Research Assistant at the Chair for Political Philosophy at the University of Zurich. In his research, he focusses on political ideologies, in particular on conservatism and nationalism as well as questions of methodologies of interpretation. His publications include The Politics of Economic Life (Routledge) and Political Conservation or How to Prevent Institutional Decay (Constellations).