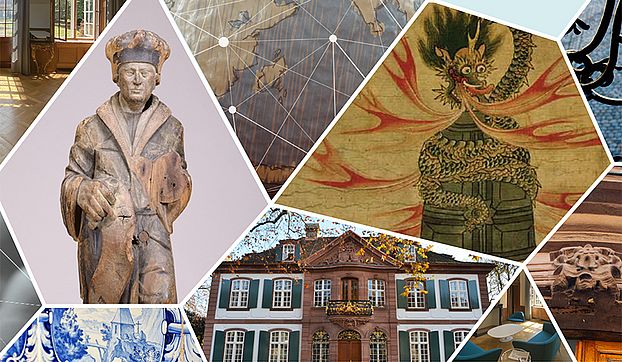 "Forgotten Icons of Global Transition" is the topic of the latest issue of the e-journal "Global Europe". Three contributions elaborate on processes of transformation by examining objects that literally disappeared as global exchange attributed new identities to them. Thus, a statue of Erasmus of Rotterdam ended up in a Japanese temple and Japanese Buddhist bells arrived in a Swiss bell foundry.

The journal opens with a contribution by Susanna Burghartz, who explores a figure of transcultural misunderstandings: Katekisama. A statue of this name is owned by a Japanese Buddhist monastery and kept as national heritage in the national Museum in Tokyo – yet this figure is none other than Erasmus of Rotterdam. Coming to Japan as a ship figure more than 400 years ago, it has accumulated, shifted, and merged identities for centuries.

Hans Bjarne Thomsen and Madeleine Herren then zoom-in on Japanese bells that reached Switzerland in the 19th century. Hans Bjarne Thomsen argues that the original belongings of the bells are unusually well documented, with dates, places, and contexts cast into the bells themselves, sometimes mentioning the temple where they were placed – however, they were stripped of their original presence in the temple with their move to Switzerland. Madeleine Herren shows that the history of bells has so far been ignored as they were imported into Switzerland as scrap metal and not as art.

The contributions show in an intriguing way how forgotten objects are made to speak within the framework of European Global Studies.

About the Authors:
Susanna Burghartz is Professor of Early Modern History at the Department of History and at the Institute for European Global Studies of the University of Basel. Her research focuses mainly on early globalization, the history of urban societies and consumption, material culture and gender history.

Hans Bjarne Thomsen holds the chair of the Section for East Asian Art at the Institute of Art History, University of Zurich. He received his PhD in Japanese art history and archaeology from Princeton University on a dissertation on the intercultural art of the Japanese artist Itō Jakuchū (1716—1800). After teaching at the University of Chicago and other universities in the USA, he received the present position in 2007. For his services in spreading awareness of Japanese culture, he was awarded the Order of the Rising Sun by the Japanese Emperor in 2017.

Madeleine Herren-Oesch is professor of history and director of the Institute for European Global Studies at the University of Basel, Switzerland. She has written multiple books, book chapters and journal articles on European and global history of the 19th and 20th centuries, internationalism and the history of international organizations, networks in historical perspective, historiography and intellectual history.

About the E-Journal:
Global Europe – Basel Papers on Europe in a Global Perspective is an academic e-journal showcasing the excellent research of graduates as well as other young and senior scholars interested in analyzing Europe and the EU in a global context. «Forgotten Icons of Global Transition: Erasmus of Rotterdam and the Buddhist Bell Trade»was published in July 2021 as the e-journal's issue nr. 120.